Steve Melnikoff, one of the oldest living veterans of World War II showed his great golf skills and strength by finishing 18-holes at BRG Da Nang Golf Resort. Receiving and invitation by Vietnam Tourism Ambassador Greg Norman on the road to celebrate Steve Melnikoff’s 100th birthday with playing Top 100 golf courses around the world by Golf.com, Steve Melnikoff was extremely impressed with the first masterpiece of the golf legend White Shark in Vietnam.

“Playing golf in Vietnam has been amazing. I have had the most fun on the golf course today. The course is in great shape and a fabulous challenge.”
“The outstanding service from the caddies too has been most memorable. Can I take her back to my home course so she can caddie for me there!!!”
Norman first met Melnikoff through a veteran affairs program and was captivated by his story. “Meeting Steve is really what it’s all about,” Norman said. “He exudes the happiness of life. Knowing what he’s gone through compared to what we’ve gone through, it’s like chalk and cheese.”
On the year that Steve Melnikoff turns 100, golf legend Greg Norman decided to invite him to tour 100 greatest golf courses by Golf.com around the world and today, he has had a great golfing experience at BRG Da Nang Golf Resort - the first masterpiece by Greg Norman in Vietnam.
Steve Melnikoff picked up golf after the war, while working in management at a steel company. To-date, he usually tees it up three times a week and enjoys playing for what he jokingly calls “high stakes” — about five bucks a round.
Steve Melnikoff  (standing third from left) enjoys his day at the Best Par 3 Hole#16 of BRG Da Nang Golf Resort
Steve Melnikoff  (standing third from left) enjoys his day at the Best Par 3 Hole#16 of BRG Da Nang Golf Resort
The secret to playing golf at 99? Melnikoff said to conserve energy he only takes one practice swing for every shot. A few other factors also help.
“I’m sure I have good genes,” he said. “My mother didn’t cook fancy food. It was always more vegetables and less meat. And I have a positive attitude in life.”
On his first day of combat, Melnikoff, then 24, landed with his regiment on Omaha Beach on June 7, 1944 — the morning after D-Day. His infantry unit relieved the tired men on the beachhead and fought their way deeper into France. On June 17, Melnikoff was shot in the throat by a German machine gun and sent to England, where he recovered from his wounds. He later returned to his unit, continued fighting through Europe and finished out the war. Melnikoff’s division was among the first to reach Berlin, and he was in the German capital on V-E Day. He received two Purple Hearts and three Bronze Stars, among other honors, for his service.
BRG Da Nang Golf Resort
Address: Hoa Hai Ward, Ngu Hanh Son, Da Nang City, Vietnam.
Call Us:(+84 236) 3958 111    Fax:(+84 236) 3958 112    Email: info@dananggolfclub.com    Website: dananggolf.com.vn
BRG Da Nang Golf Resort © 2016 All right reserved 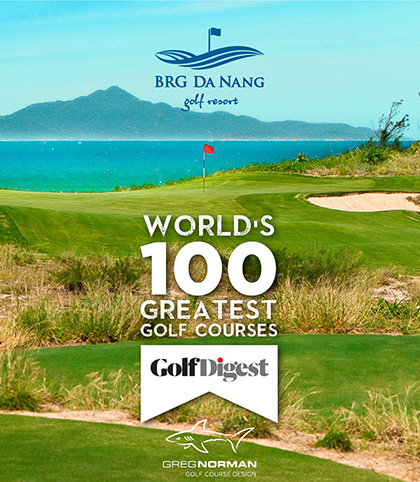